Give to the Library

Under the direction of Dean Shawn Calhoun, the University Library updates its resources and technology regularly to ensure USF students and faculty have a productive space for study, learning, and research. The library staff is made up of approximately 90 dedicated librarians, staff, and student workers.

Dedicated in December 1950 and named for Fr. Richard A. Gleeson, S.J. (1861-1945), the library was the first new building constructed on USF's campus in 20 years. Gleeson arrived at St. Ignatius College (later the University of San Francisco) in 1882 as a professor of classics, English grammar, arithmetic and penmanship. Best remembered for his tenure as Prefect of St. Ignatius Church from 1918 to 1945, Fr. Gleeson was cited in an article in the San Francisco Chronicle as "the most beloved person" in San Francisco. 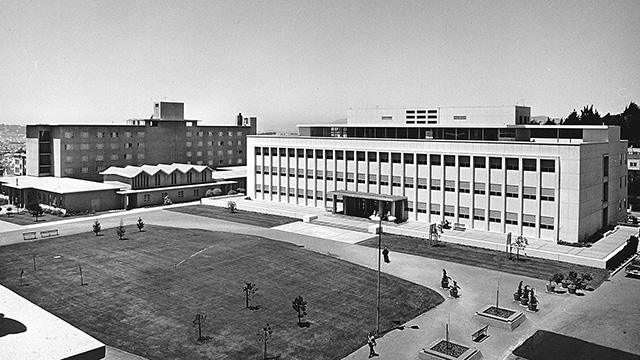 The Gleeson Library was a fitting memorial to the father's name, since it, too, has served the University well. The University Librarian, Fr. William Monihan, worked closely with architect Milton T. Pflueger in designing a building that was both large (four floors with approximately 59,000 square feet) and flexible. Their foresight produced a library that answered the University's needs for 45 years. In 1950, the building served 2,000 students; today it accommodates many more students plus faculty, staff, alumni, community members and scholars.

A library showcase is the Donohue Rare Book Room. Started with a 400-volume collection of works by Sir Thomas More obtained in 1972, the room now houses more than 20,000 items. Among its treasures are a fragment of the Gutenberg Bible dating from the 1450s, medieval illuminated manuscripts, and a collection of letters from the English Catholic novelist and film-writer, Graham Greene. There is a particularly fine selection of first editions by 20th century literary figures and limited editions from California presses.

Named in honor of Charles and Nancy Geschke, the 1997 addition to Gleeson Library was the first new building erected on the central campus since 1973. Adding nearly 36,000 square feet to the University libraries, the Geschke Center provides improved reference and circulation services, better access for disabled patrons and permits the collections to increase in size. The Geschke Learning Resource Center was conceived by Esherick Homsey Dodge and Davis, Bay Area architects who have garnered national acclaim for library design. 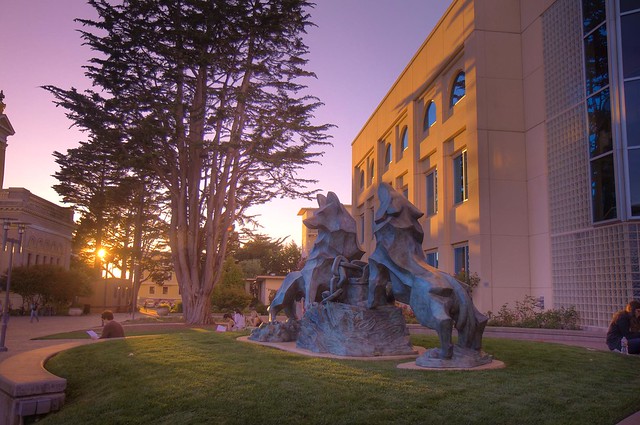 The first floor of the western end of the building houses the library's reference and access services departments. A collaborative study area is on the second floor, and stack areas and the Dean's office suite are on the third. Remodeled areas on the first floor of the existing building include the Thacher Gallery, the ITS help desk, and an electronic library instruction classroom.

The Geschkes have been closely connected to USF since their daughter, Kathleen, matriculated here in 1988. Chuck Geschke joined the President's Roundtable in 1989, became Chairman of the Arts and Sciences Advisory Board and was appointed a Trustee in 1991, and served as Chairman of the USF Board of Trustees from 2003 to 2007. A respected leader in the software industry for more than 25 years, Geschke was president and co-founder of Adobe Systems, Inc. His roots in Jesuit education extend back to 1963-68, when he taught Mathematics at John Carroll University.

Since Nancy Geschke holds a Master's in Library Science degree from San Jose State University, it was natural that the couple was interested in the library addition. Nancy noted, "This building appealed to us because it will be the center of learning at USF, and learning is obviously the heart of the University. As a librarian, I know what a difference a well-designed facility can make for students and all library patrons." In agreeing to help fund the Center, Chuck Geschke adds, "We eagerly accepted the opportunity to have our family be associated with USF."

The dramatic glass-enclosed atrium that anchors the east end of the Geschke Center honors Fr. William J. Monihan, S.J. The atrium, located at the heart of the lower campus, features 5,000 square feet of open space punctuated by two handsome balconies. The zinc roof echoes the dome of St. Ignatius Church, clearly visible through the faceted glass walls. The Monihan Atrium provides library users with a quiet place for study and contemplation as well as a centrally located space for occasional University functions. 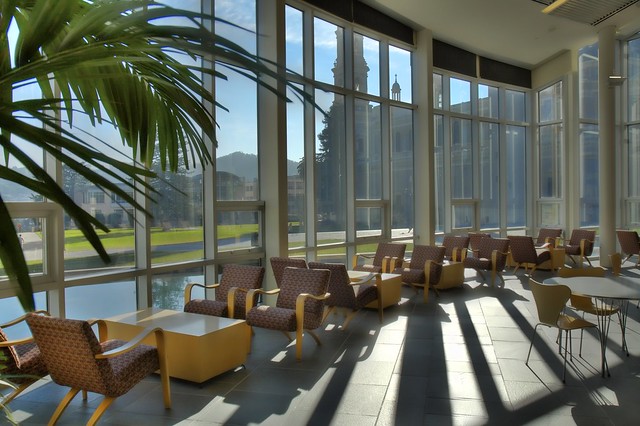 Fr. William Monihan was the founder and driving force of the original Gleeson Library. During his 47 years of service, first as University librarian then as director of library relations, he saw the collection grow from some 20,000 books to one of more than 600,000 volumes. He was instrumental in developing the Donohue Rare Book Room, dramatically increasing the library's endowment and founding the Friends of Gleeson Library volunteer support group. Fr. Monihan's dedication to the University and his deep love of books shone through his modest demeanor.

A painting of Fr. Monihan by Furman J. Finck, the father's personal favorite portrait, hangs in the atrium with the following inscription: