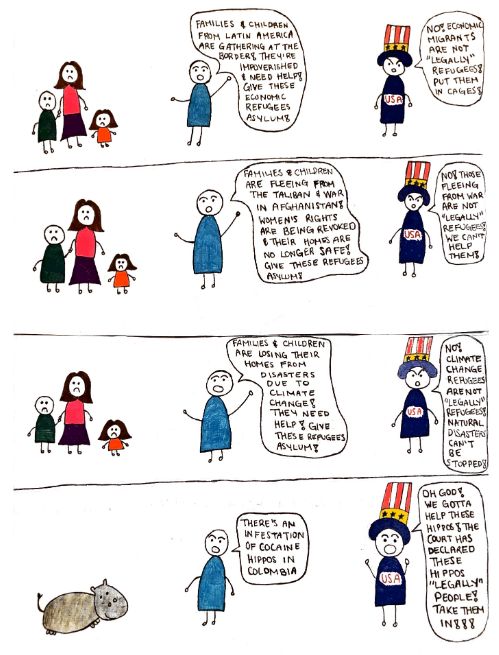 A comic with four panels depicting how the U.S.rejects taking in refugees.

A comic with four panels depicting how the U.S.rejects taking in refugees. The first panel features a family, a refugee advocate, and another character illustrated as the ‘USA.’ The refugee advocate says, “Families and children from Latin America are gathering at the border! They’re impoverished and need help! Give these economic refugees asylum!” In response, the USA character says, “No! Economic migrants are not ‘legally’ refugees! Put them in cages!”

The second panel features the same exact family, the refugee advocate, and the USA character. This time, the refugee advocate says, “Families and children are fleeing from the Taliban and war in Afghanistan! Women’s rights are being revoked and their homes are no longer safe! Give these refugees asylum!” Similar to the first panel, the USA character says, “No! Those fleeing from war are not ‘legally’ refugees! We can’t help them!”

The third panel features the same exact set of characters again. Similarly, the refugee advocate says, “Families and children are losing their homes from disasters due to climate change! They need help! Give these refugees asylum!” Again, the USA character responds, “No! Climate change refugees are not ‘legally’ refugees! Natural disasters can’t be stopped!”

The main issue in this crisis of refugees is that refugees are not “politically” refugees and are therefore rejected asylum, put in concentration camps, and dehumanized through horrendous legal processes that don’t even help them in the end. They are even, apparently, more legally human than cocaine hippos as illustrated in the comic. These “cocaine hippos” are the offspring of the hippos once owned by Pablo Escobar, the Colombian drug lord from the 80s, who used hippos to illegally import and export cocaine and other drugs (CBS News, “Pablo Escobar's "cocaine hippos" are legally people, U.S. judge rules”). Their numbers have increased drastically and at a fast pace that they now pose a threat to biodiversity. In consequence, the U.S.government sued the Colombian government for deciding to kill and sterilize the hippos, resulting in the federal court ruling that the hippos are “‘interested persons’ with legal rights in the U.S.” (CBS News, “Pablo Escobar’s “cocaine hippos” are legally people, U.S. judge rules”). Thus, the point of the comic is to demonstrate how immoral the U.S. has become in politicizing refugees because it has gotten to a point where refugees are seen as less than human beings - less than hippos to be exact - and therefore justifying the U.S.’s refusal to help them under “legal terms” of refugees.

The 1951 Refugee Convention defines a refugee under a basis of five grounds for refugee status. A refugee must be a person fleeing “persecution based on race, religion, nationality, membership in a social group, or political opinion” (Elizabeth Ferris, “Climate Migrants Can’t Wait for Global Frameworks”). To have this confining legality of refugees is the central reason many refugees coming to the U.S. and other wealthy countries are being denied refugee status and/or asylum, simply due to the fact that they are not fleeing persecution under these five grounds set nearly 70 years ago. These grounds exclude economic refugees fleeing poverty and impoverished nations, those fleeing violence and war, and those fleeing due to climate change disasters. Hence the reason for the first three panels of the comic featuring all these exact refugee peoples seeking asylum and ultimately getting denied by the U.S. character stating, “they are not ‘legally’ refugees”. And yet, the U.S. has openly welcomed cocaine hippos that received citizen status under federal court law much faster than it takes for a DACA recipient to receive citizenship.

To define a refugee is to harm them. By defining them, hundreds of thousands of refugees are left in the dust simply because they do not “qualify” as a refugee legally and therefore, do not receive aid. The legality allows nations to create loopholes to further deter or deny refugees from coming to their country of destination, like separating families and putting them in cages as inferred in the first panel of the comic. Or perhaps use the State of Exception in which “sovereign authorities declare emergencies in order to suspend the legal protections afforded to individuals while simultaneously unleashing the power of the state upon them” to prevent refugees even entering or reaching the border.

Donald Trump declared the COVID-19 crisis as a “State of Exception” to deny asylum to any refugees coming to the U.S. during the 2020 quarantine, resulting in more family separation and caging as if they were wild animals to be detained and kept in captivity (De Leon, 27). Politicizing refugees not only prevents them from receiving status and aid, but it ultimately dehumanizes them, which only further prevents them from receiving the help they need. The politicization blinds us from seeing them as human beings, so much so that cocaine hippos seem to be more human than these actual human beings who are simply “in pursuit of security and the chance to rebuild their lives” (Bycel, 4). They are people who never wanted to leave their home countries but were forced to. And to categorize refugees also harms dehumanizes them, which is why the refugee families featured in the first three panels of the comic appear exactly the same - because they are all people trying to survive and seek a better life. There is no inherent difference between economic refugees or climate refugees or any other refugee. Neither their race, their ethnicity, their religion, their gender, their sexuality, etc. They are all human beings simply trying to restart in a new country.

The drawing also demonstrates how the U.S. contradicts itself in its ethical approach of Deontology in regards to international and immigration laws. Deontological ethics involve having a sense of duty to do the right thing and the U.S. has a habit of proclaiming its own sense of duty to do the right thing, which they did in regard to cocaine hippos from Colombia even when it had nothing to do with the U.S. However, the same duty disappears when it comes to actual human refugees from various countries. The U.S. certainly has a duty they owe to all refugees coming to the country, especially when a majority of refugees seeking asylum in the U.S. have resulted to fleeing their country due to U.S. involvement in their home country. Hence why the comic specifically references Latin American refugees, Afghan refugees, and climate refugees because they all have become refugees as a result of U.S. corrupt and immoral actions. Therefore, the U.S. owes it to these refugees to allow them to start a new home in the U.S. It is the morally right thing to do for all refugees, regardless of why they are here or where they come from.

Bycel, Lee T. Refugees in America: Stories of Courage, Resilience, and Hope in Their Own Words. Rutgers University Press, 2019.