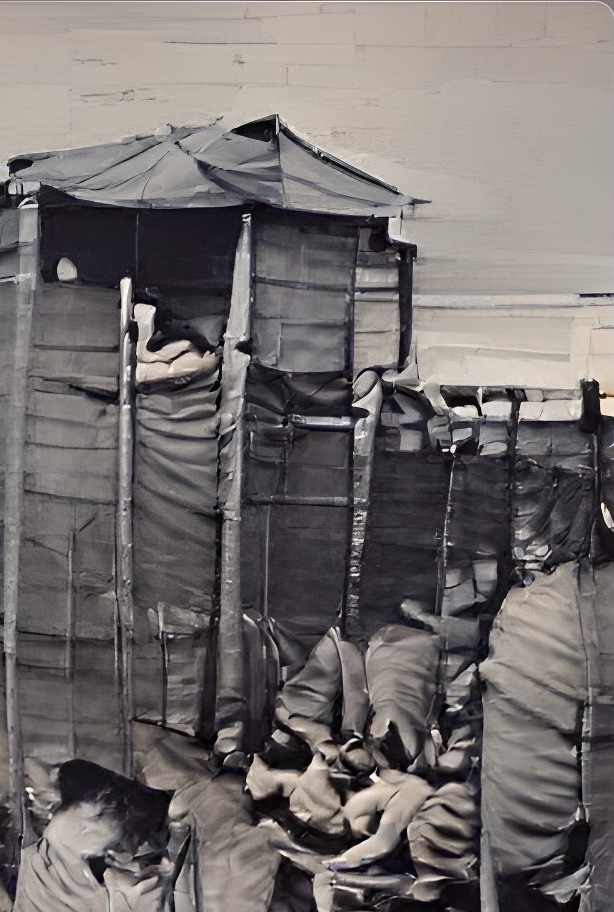 Artwork depicting a mass of people pile up against a border fence with a seemingly endless desert on the other side.

This abstract piece of artwork seeks to display of the difficulties that immigrants and asylum seekers face.  The location of this artwork could be any hard border but my inspiration was the US southern border.  The US southern border is the promise land for many Latin American immigrants as it signifies they have made it to the US.  But just reaching the border is not the end of their troubles and all immigrants face a perilous task of crossing it safely whether it is legally or illegally, both options come with dangers.  Behind the imagery of a border fence and checkpoints that are twisted and mangled representing the twisted and mangled system that they uphold, there is a bleak endless expanse.  Now this represents two things the first being a metaphorical look at seemingly endless challenges that will face immigrants from legal challenges all the way to being imprisoned.  The second and more literal meaning is that this bleak white area is the desert that immigrants might have to cross to make it to America.  The structural violence that the US employs to murder immigrants by pushing them to cross through the deadly Sonoran Desert of Arizona (DeLeon).  Then learning that many of the people who die crossing through the desert fade away as their deaths are not recorded because of where and how they died is heartbreaking.  Now pivoting the final part of the image is the mangled mess of bodies that seem to have piled up alongside the fence.  This looks to represent a number of things.  First, I wanted them to be a reminder of all those who have died seeking asylum but even past that I chose to not give any of them faces of personality because many times immigrants are robed of their humanity in the way their stories are covered.  Secondly, I think that showing just how broken someone may be mirrors how the US leaves countries that these immigrants come from.  Learning about Guatemala and the United Fruit Company and the Salvadoran Civil War and just how the us ripped these countries apart without remorse and leaves those places broken and in turmoil (Getzels).  So leaving the humans in this art piece as almost a unrecognizable mass mirrors not only how the US treated those countries but also how dehumanizing it can be for these immigrants.  For colors I chose black and white because I believe it is powerful when armed with the knowledge that I wanted the skyline to look bleak and desolate.

This art piece evokes a sense of deontological ethics.  This piece looks to capture the absolute worse an immigrant may have to face and bring out a sense of morality in the person looking at it.  The goal was to speak to the morality of humans and show that something must be done when refugee crises happen.  Even past that a lot of the refugee crisis that we learn about here in the US are our fault from toppling governments to instating brutal dictatorships especially in places like Latin America.  So, the goal of this piece is to evoke a sense of moral duty to help those in need.